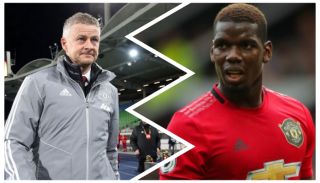 Ole Gunnar Solskjaer says ‘you can expect’ Paul Pogba to be at Manchester United next season.

There has been tons of speculation over Pogba’s future the past few months, with many suggestions that he could be on his way to Real Madrid or returning to Juventus in the summer.

But speaking to the media after United’s 5-0 win over LASK, Solskjaer said he expects Pogba to stay put this summer and continue his spell at Old Trafford.

The Telegraph’s James Ducker quoted Solskjaer on Twitter, as seen below:

Solskjaer on Pogba’s future: “Paul’s our player. He has two years left on his contract, a year plus the option of another. You can expect Paul to be here [next season], yeah.” #mufc

I don’t think this completely squashes the Pogba rumour mill. You never quite know what will happen next when it’s a client of Mino Raiola at the negotiation table.

This may be a plot to ensure United get the highest transfer fee possible for Pogba in the summer. The manager isn’t going to come out and say the opposite, like ‘he’ll be off’ or something along those lines.

Solskjaer was happy with his side’s performance on the night, saying (via Manchester Evening News), “You can say professional, but also a very good job. It wasn’t just professional and efficient, but quality football. We got more or less everything we asked from the boys.”

On the goals — scored by Bruno Odion Ighalo, Daniel James, Juan Mata, Mason Greenwood and Andreas Pereira — Solskjaer added: “You can look at all of them. They are high, high quality.”

A good night for the Reds, capped off with some potentially good news on Pogba.