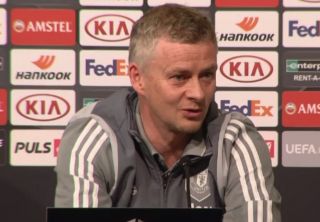 Nobody really knows what’s going to happen in the football world amid the worrying coronavirus outbreak.

Manchester United travelled to Austria today and Ole Gunnar Solskjaer addressed the media ahead of the Europa League clash against LASK.

A member of the media asked whether the Europa League could end early because of COVID-19.

Solskjaer said (via Manchester Evening News): “We don’t know what is going to happen, we just have to get on with it. I think football is about fans, without fans it is nothing. It should always be for them. A difficult situation but the boys are very good at focusing on the job in hand.”

Following decision taken by the relevant authorities, the following UEFA club competition matches will go ahead as scheduled but will be played behind closed doors.

Champions League, Round of 16:

Europa League, Round of 16

The United boss was also asked if his players have been tested for coronavirus, to which he replied: “No we haven’t had any tests. That will be the experts and our doctor, but we have had no reason to so far.”

Solskjaer would understand if football is postponed because of the virus.

He added: “I would understand, yes. It is up to the experts to decide, and the main concern must be the health of the general public.”

“Based on that guidance, all home matches are currently scheduled to go ahead as planned and any change in the situation would be communicated to fans as soon as possible.

“Old Trafford currently remains open to fans for matches, as well as for visitors to our Museum, Megastore and the Red Café. Our Stadium Tours are going ahead as normal except for the changing rooms, which are closed to visitors until further notice as a precautionary measure.

“We urge people planning visits to Old Trafford to familiarise themselves with the latest UK government advice on coronavirus, particularly in relation to people who have recently visited high-risk areas or come into contact with people who have.

“We also remind visitors of the importance of following routine health and hygiene guidelines, such as regular hand washing and covering the mouth and nose when sneezing and coughing.”