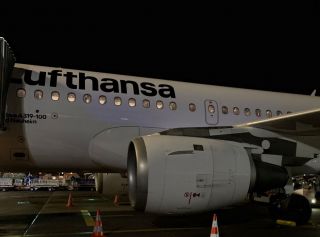 A plane carrying Manchester United fans to Austria was forced to emergency land in Germany due to an issue with the engine, according to reports.

Supporters are still making to trip despite United’s game against LASK being played behind closed doors because of coronavirus fears.

The Sun claims that the fans in question had to spend Tuesday night in Frankfurt and thankfully everyone escaped unscathed after a safe landing.

Press Association journalist Simon Peach was on the flight. He tweeted the following:

Hats off to the pilot for dealing with whatever that was so smoothly. Everyone OK… just thirsty 🍻 pic.twitter.com/FusJCYse0g

Peach described how passengers could see an orange glow after the engine lit up mid-flight which is more than enough to cause concern.

The Europa League clash will be played at the 21,000-capacity Linzer Stadium on Thursday — with United fans expected to find a decent boozer to enjoy the game in.

A little later than planned but made it to Linz. LASK press conference 2.30pm local & #MUFC scheduled for 7pm (6pm UK) 🇦🇹

Moreover, it has been reported that United have banned non-essential visitors from attending the training ground due to the spread of coronavirus, as cited by The Express.

The club need to take serious steps to protect the players and staff. This update suggests they are doing exactly that.

Arsenal players are in quarantine and their clash against Manchester City tonight has been called off, whereas Chelsea’s Champions League tie at Bayern Munich will also be played in an empty stadium.