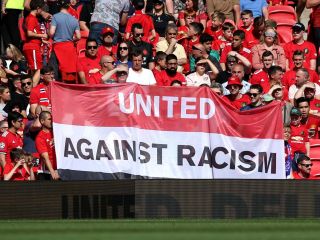 Manchester United have confirmed they are co-operating with the police over an alleged incident of racist and physical abuse at Old Trafford last month.

We published the shocking details on Tuesday but the investigation surrounds a worker for an outside catering agency, who was simply trying to gain access to the stadium on February 27.

United were playing Club Brugge that evening in the Europa League. It is alleged that a 19-year-old man was racially abused and assaulted while being at Old Trafford for work purposes.

“Shortly before 8pm on Thursday 27 February 2020 it was reported that two men subjected a man to racist comments before assaulting him.

“An account was taken from the victim later that evening and officers have since been keeping in contact with him while working to gather further important information.

“This includes reviewing CCTV images from the area where the incident is believed to have taken place to try and identify those potentially involved.

“GMP takes allegations of this nature very seriously and is committed to exploring every possible line of inquiry.”

Kids of Colour have shared the victim’s account of the incident, referring the boy in question as ‘K’, who claimed a guard looked in his bag and said ‘surprised I didn’t find a knife.’

SINCE this statement yesterday, an update:

• GMP have visited K, taken a statement and are investigating CCTV • CSG have denied incident but are cooperating • Media are in touch with K • K has a solicitor and we’ll pass on witness info • We are told Man Utd are cooperating https://t.co/WJlU4YqS8x

Addressing the alleged abuse, a United spokesperson said (via Independent): “We are aware of an alleged serious incident prior to the Club Brugge match on 27 February.

“We are co-operating fully with the police and await an outcome from their investigation.”

The security company in question (CSG) has strongly denied the allegations.

In a statement, they said: “Controlled Solutions Group will comply fully with any investigation into the allegation of the assault or abuse by members of our staff.

“CSG will be fully compliant in support of any police or other investigation into these false allegations.

“We are extremely confident that there will be no further action by police or any evidence produced to corroborate this individual’s claims following further inquiries. CSG will make no further comment on this issue.”

Given there are cameras everywhere outside the ground, surely the club and police will be able to go back and check footage to see if there was physical assault or a verbal interaction of some sort.

Something has to be done about this sooner rather than later.