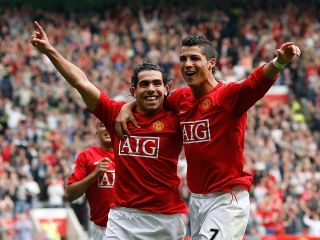 Tevez had no place for City’s title win when discussing the top three moments of his career but he made sure to include United’s Champions League win in 2008.

Although it’s obviously a bigger feat for a footballer to achieve, Tevez left Old Trafford under a grey cloud joining City and became rather anti-United in the years that followed.

Like when he held a ‘RIP Ferguson’ headstone cardboard cut-out during City’s title-winning parade in Manchester, mocking his former boss in a very disrespectful manner, as seen below:

“It seems like Ferguson is the president of England. When he speaks badly about a player, nobody says he has to apologise. But when someone comes out with a joke about him, you have to say sorry. I don’t say sorry!” pic.twitter.com/Ey3HRjDQSS

But the Premier League he won with City was their first league crown in 44 years, pipping the Red Devils to the title on the final day of the season in 2012.

This week the 36-year-old added the Super League title in Argentina to his collection.

Tevez was asked where his latest achievement ranked in his career up until now.

“It is one of the most important titles due to the circumstances,” he told El Intransigente (translated by Manchester Evening News).

“I came three years ago to fight it; it was to get the head out of a well that became eternal. It was a unique night — a very big relief.”

Tevez, who resembles a bulldog on the pitch, placed the title win in his top three career moments alongside Boca’s Intercontinental Cup win and United’s Champions League success in Moscow against Chelsea.

City fans will be sad to see that leaves no place for their 2012 league triumph.

“It’s in the top 3 with the Intercontinental Cup in Japan and the Champions League with Manchester United.”