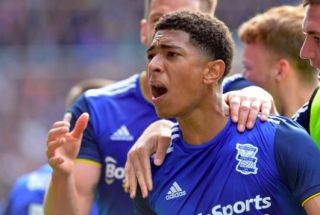 Former Crystal Palace Chairman and TalkSPORT pundit Simon Jordan has sent a warning to Jude Bellingham over a potential transfer to Manchester United.

Bellingham, 16, is already being described by some as a generational talent and has caught the eye of a number of top clubs after his performances for Birmingham City this season.

The youngster has made 25 starts in the Championship this season, and has looked at home in a physically demanding league, where he has operated in a number of positions.

And he now has to make a decision on where his future lies; Bellingham could choose to continue his development at Birmingham where has looked so impressive, or join a club of the stature of Man United.

As reported by the Telegraph, Bellingham visited United’s Carrington training ground on Monday as Sir Alex Ferguson helped to give him a tour of the facility.

READ MORE: Photo: Wan-Bissaka the only Man United player to feature in WhoScored team of the week

The Reds are said to be very keen on signing the youngster, but face strong competition from Borussia Dortmund, who are known for developing young talent such as Jadon Sancho.

But Jordan thinks Old Trafford may not be the best destination for the midfielder at this age, comparing him to Wilfred Zaha.

“Look, Bellingham is a prodigious talent but making a move at 16 and going to a club like Manchester United that is in a transition period, he’s unlikely to get first team football,” Jordan told TalkSPORT.

“Wilfried Zaha couldn’t do it at 19, and this kid is 16 going into that environment.

“Whilst I understand the dynamics of it, I’m also troubled by it to some extent.”

Bellingham’s price will only rise further as he becomes a more household name. He has already established himself as a first-team regular and he has shown remarkable maturity for a player of his age.

But a lack of first-team football when he initially arrives at Old Trafford should not put off the player from becoming part of Ole Gunnar Solskjaer’s long-term rebuild.

By handing Brandon Williams 17 senior starts this term, Solskjaer has shown he is not afraid to give youngsters who are ready a chance to thrive in the first-team.

However, signing Bellingham this summer will allow the United boss to use the loan market to continue the player’s development while he prepares for the first-team.

Solskjaer has arguably been guilty of not allowing Tahith Chong and Angel Gomes to go out on loan and get some first-team action this season, but Bellingham could benefit from another season in the Championship with Birmingham.

Therefore, there is no reason why Bellingham cannot seal his move to Old Trafford this summer, and eventually join up with the United squad after another year of regular first-team football.