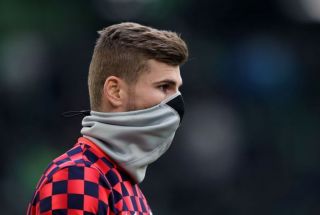 A rather misguided Timo Werner has played down the prospect of leaving RB Leipzig this summer.

The Bundesliga hitman could make the step up to play for a bigger European club, but it seems the player himself isn’t pushing for such a move.

Werner has told Sky Sports that he doesn’t see a reason to leave his current club, even though a report from The Sun recently claimed that he was a Manchester United target.

The 24-year-old took a swipe at United, suggesting he isn’t keen to join a team that is essentially a faded force — one who has forgotten how to deliver league titles.

“At this time in professional soccer there are two different variations,” Werner said. “The first is to be part of a team like Liverpool or Manchester City. They have a good working team. The teams have great coaches.

“But this is the question: do you want to go to that kind of team, because the situation is already that hard for each member and you want to be a part of it? That’s one point you have to look at.

“The other side are teams which need some big changes, because they just won a few big titles, but they are not able to compete on the highest level anymore. For me Manchester United is one of these teams.

“So at this point of my career I’m asking myself: do I want to be part of a new team, to build up something new, or do I want to stay at my team and make something great?”

Liverpool have been closely linked with the German striker lately, as per The Express, and their fans will undoubtedly be amused by his comments on United, though it doesn’t sound like they will be landing him either.

I think with some of the signings Solskjaer has made this past year, it’s clear our rebuild is based on players who are hungry to play at the top and for Manchester United.

It’s worrying that Werner doesn’t seem to have that drive, but best of luck to him at Leipzig — until he gets cold feet and runs to Bayern Munich or somewhere!