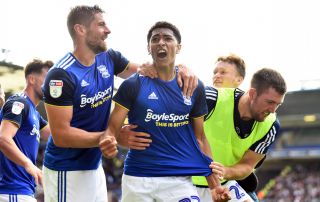 The 16-year-old is already seen as a generational talent after arriving on the scene this season and there’s no surprise that the Reds are making moves to sign the youngster.

Bellingham has featured in a number of positions for Birmingham this season. He’s been deployed in defensive midfield but also in a more advanced role where he has looked comfortable.

Despite his age, Bellingham looks completely unfazed in the physically demanding Championship and is remarkably very rarely shrugged off the ball.

The youngster won the EFL young player of the month award in November and captained an England u17 side to Syrenka Cup success in September, where has was named player of the tournament.

Having already established himself as a coveted star, Bellingham now has a decision to make on where his future lies.

He could stay at Birmingham and continue his development in the Championship, or accelerate his career path by moving to a top side like United this summer.

As reported by the Telegraph, United had Sir Alex Ferguson showing Bellingham round the Carrington facility as part of a ‘charm offensive’ to convince him to join the club.

But the same report says Solskjaer’s biggest challenge over his signature comes from Germany in Borussia Dortmund.

Dortmund have a good reputation for developing young and emerging talent, as they did with Jadon Sancho, and Bellingham’s father is said to believe a move to the Bundesliga would benefit his son the most.

United need to convince Bellingham that Solskjaer’s project is the most attractive and show the midfielder that the club has serious ambitions to return to the top with him playing a central role in the long-term rebuild.