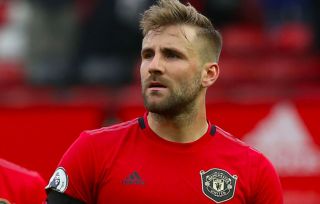 Most of Manchester United’s starting eleven that faced Manchester City on Sunday at Old Trafford were deserving of a place in the team of the week.

Ole Gunnar Solskjaer’s side produced their most complete performance of the season to defeat Pep Guardiola’s City for the third time this season.

Alan Shearer has selected two of United’s back five, Luke Shaw and Aaron Wan-Bissaka in his Premier League team of the week.

Shaw has resurrected his United career with his form since Christmas and has arguably found his best position on the left-hand side of a back three.

But it was the moment in the game when the full-back moved out wide after Eric Bailly was brought on for Brandon Williams that was so important.

United were on the back foot with Williams tiring up against a fresh Riyad Mahrez, but Shaw moved to left wing-back and was fantastic up against the Algerian winger.

Meanwhile, nobody has managed to keep Raheem Sterling quiet as Aaron Wan-Bissaka this term.

The 22-year-old was again immaculate defensively and contributed to United attack’s when necessary.

See Shearer’s team of the week below, courtesy of the Premier League.