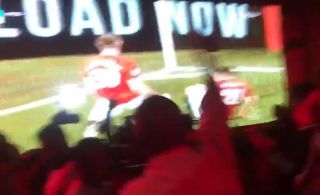 No matter where you were in the world yesterday, there’s a good chance you heard celebrating as Scott McTominay scored the winner against Manchester City.

A cracking goal, too, shooting from approx 40 yards and a terrible throw from City goalkeeper Ederson saw the ball roll right in front of him.

However, a video has emerged of a group of Kenyan Manchester United fans celebrating McTominay’s winner in the Manchester derby.

The tweet sharing the video claims that former United striker Dwight Yorke was in attendance (via @ManUtd_HQ) — but there has been no confirmation of that, and he cannot be seen in the clip.

Dwight Yorke is in this video apparently. pic.twitter.com/htQSvCKEbV

And turns out that Yorke is actually in Nairobi, so there is a chance he was there meeting fans for the big game.

We imagine quite a few pubs looked like this in Manchester yesterday!