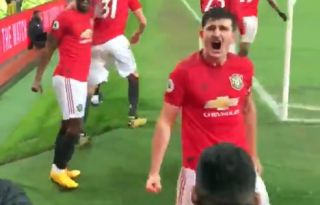 United have done the league double over City for the first time in 10 years, which is a poor record for any United side really.

We enjoyed it and Maguire made his feelings known as United won on derby day.

Check out the fan footage below:

look at my fucking captain pic.twitter.com/ly8O9B5N47

Before his big money move to United in the summer, the England international was a reported target for Pep Guardiola’s City, so maybe that gave yesterday’s victory an added boost.

Rub the salt into their wounds!