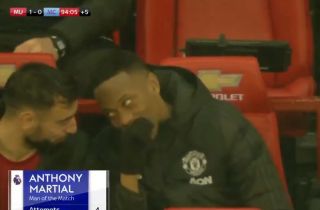 Manchester United have gone 10 games unbeaten. It’s no wonder that the atmosphere around Old Trafford is so much better.

For instance, it’s been a long time since I’ve heard a reaction quite like yesterday as Scott McTominay’s goal went in. The place was bouncing and thankfully Anthony Martial’s wife recorded some of the best bits from a box in the stadium.

Fernandes is on an entirely different level and it’s as if his mind reads the game quicker than other players.

And Martial was on the same page, anticipating a looped pass over the wall before striking beneath Ederson.

Now the pair seem to be developing a bromance on social media.

After the game, Fernandes tweeted: “Manchester is red. Finally you scored with my assist @AnthonyMartial.”

Manchester is red 🔴 Finally you scored with my assist @AnthonyMartial 😂👏🏻 #MUFC @ManUtd pic.twitter.com/ZJwlj7Oeob

But during the game Fernandes and Martial were caught joking on the bench after both were substituted by Solskjaer after brilliant performance.

Check out the video below (footage courtesy of Sky Sports):