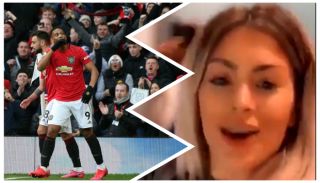 What a win that was yesterday!

A solid performance that saw Ole Gunnar Solskjaer’s side fight for one another. To do so with a sucker-punch at the very end felt sweet, but it was Anthony Martial’s first-half goal that had fans on their feet first.

The arrival of Odion Ighalo has seen a positive reaction from Martial. Manchester United legend Roy Keane credited the Nigerian striker for igniting a ‘reaction’ out of the Frenchman, scored a beautiful goal in the Manchester derby following a smart free-kick from Bruno Fernandes.

READ MORE: Victory over Man City means this Man United side is the first since 1961 to complete an impressive double

Since Ighalo’s arrival in January, Martial has scored in three of their last five league games as he’s stepped up in the absence of Marcus Rashford.

Speaking after the game, he told Sky Sports (via Irish Mirror): “You’ve had a reaction as well from Martial.

“Sometimes a new striker comes in, you praise the new striker, but then that pushes the other lads.

“There’s almost been a reaction from Martial, thinking: ‘Oh, I’ve got another player to fight with for my position’. And there’s been a good reaction.”

His wife recorded herself at the game yesterday and went crazy as he scored, as seen below:

Old Trafford rocked again at the very end when Scott McTominay scored from distance to embarrass Ederson. The Brazilian had a bad derby and was at fault for the game’s two goals.