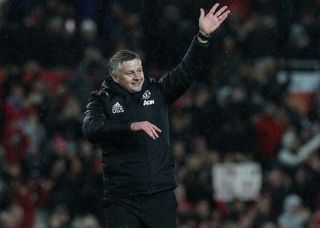 Almost a year to the day since that night in Paris which secured Ole Gunnar Solskjaer the permanent manager’s hotseat at Old Trafford, United turned in one of their best collective performances of his tenure. This win was much more than just another three points in the race for Champions League football next season. United secured a third win of the season over the ‘noisy neighbours’, and in the process completed a league double over City for the first time in a decade.

A game which started off with a few hairy moments ended with Scott McTominay’s long range match-clincher sending the Theatre of Dreams into raptures. This was a triumph of tactics, technique and perhaps most importantly – tenacity. Each United player, to a man, showed the tenacity to dig in whenever City were on top going into the latter stages of the game – allied to the quality of the first half showing which yielded Anthony Martial’s opener. That came from another piece of Bruno Fernandes ingenuity, with a training ground free-kick routine catching City cold, and Ederson out at his near post.

Scoring first was always going to be a crucial part of United’s game plan, allowing them to sit deep and counter attack. For all City’s possession, clear-cut chances were at a premium in the first 45 minutes, with Fred, Nemanja Matic and Aaron Wan-Bissaka in particular, putting in stellar displays throughout. They provided quality in possession and the necessary bite out of it to ensure the visitors were never in their comfort zone.

This was a co-ordinated pressing effort led from the front by Martial and Daniel James. Both were probably guilty of selfishness on separate occasions in both halves, opting to shoot rather than pick out Fernandes in space on the edge of the box – but both were equally as important in ensuring City’s suspect defence was kept occupied throughout.

The signing of Fernandes really has brought out the best in Martial, with the two appearing to strike up a close relationship both on and off the pitch. Whilst the Portuguese’s influence lessened in the second half with City’s stranglehold on possession, he constantly demands more from those around him – something Martial has definitely responded to. Albeit, not having to rely on Andreas Pereira or Jesse Lingard for incisive passes in the final third does also help. Neither of whom were in the matchday squad for a second league game running, which, in itself, speaks to United’s recent progress.

Despite the absence of Kevin De Bruyne for City, it has been a long time since a United midfield has so comprehensively outplayed their sky blue counterparts. Fred provided his usual energy, whilst Matic shielded the defence expertly – both moved the ball quickly into forward areas and allowed Fernandes to exert his influence on the first half in particular. United probably should have been awarded a penalty close to half time when Fred was upended by Nicolas Otamendi, only for Mike Dean to book the Brazilian – and VAR to inexplicably not overturn the decision. City did score early in the second half, but VAR again stepped in and disallowed Sergio Aguero’s effort for the most marginal of offsides. An armpit coming to United’s aid when needed most.

There were some similarities to October’s home game with Liverpool where United were pegged back late on, particularly as Riyad Mahrez continued to threaten down United’s left hand side – leading to the introduction of Eric Bailly for Brandon Williams. United, however, kept fashioning promising positions, with only decision-making letting them down. City attacks kept coming in waves, with United crying out for the introduction of Odion Ighalo to hold the ball up and alleviate the pressure somewhat. That only came in the dying minutes of normal time, but the Nigerian excelled in everything he did upon his introduction – and is a welcome alternative to United’s existing striking options, despite all the scepticism when he signed in January. Notable mentions also for Harry Maguire and Luke Shaw, whose improvement has been marked in recent weeks and months – perhaps a result of added competition from Williams.

The necessary clear out isn’t yet complete, but the cultural reboot that Ole has initiated is beginning to pay dividends. The work is far from finished and the big games keep coming, with a massive trip to Spurs awaiting next Sunday. United need to capitalise on the positive momentum generated in recent weeks, unlike last season when the PSG comeback was followed up by form going into freefall. One thing not up for debate is that this United team is playing for each other in a way that hasn’t been seen since the latter days of Sir Alex Ferguson. The Old Trafford atmosphere was an emblematic of a fanbase at one with the players on the pitch, and credit must go to the manager for that. McTominay’s injury-time strike sparked scenes of unbridled joy at the final whistle, and it’s moments like that which make me miss going to games all the more, particularly knowing I would have been there had I not been watching from here in Sydney, Australia at 5.30am on a Monday morning. I will be back though, and so will United. Let’s hope this win is just another step on that journey.