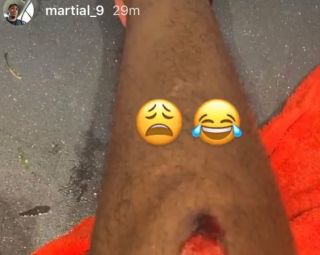 Anthony Martial has revealed the extent of an injury he suffered when colliding with the post while trying to close down Manchester City goalkeeper Ederson during Sunday’s Manchester derby.

Martial scored Manchester United’s opening goal of the 2-0 win from a free-kick routine straight from the training ground as Bruno Fernandes looped the ball over City’s wall for his French team-mate to finish.

Ederson left the ball slip beneath him, and Martial saw another opportunity to score when the Brazilian mis-controlled a back-pass in the second half.

Martial failed to make contact with the ball in his attempt to close down the City keeper and his legs hit the post as a result.

He was treated in the box and continued to play until he was substituted with over 10 minutes left on the clock.

After the game, the 24-year-old shared the extent of his injuries on social media, with a short video showing nasty gashes on both legs.

Anthony Martial’s injury after crashing into the post 😳 pic.twitter.com/QVu4TICbrd

Scott McTominay scored the winner in stoppage time following another mistake by Ederson.