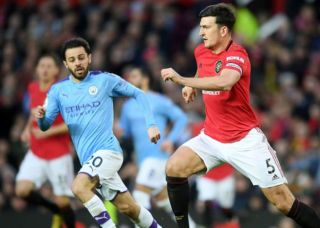 Oh what a night! Manchester United sealed a momentous double over toothless City with a nerve shredding 2-0 win over Pep Guardiola’s soon to be deposed champions.

Ole Gunnar Solskjaer’s side were clinging to the slenderest of leads when Old Trafford erupted as substitute Scott McTominay wrapped up a fully deserved victory in stoppage time to add to Anthony Martial’s  first half training ground goal. It was United’s third win over City this season to keep pace with the chasing Champions League pack and return to fifth in the table. The spirit, the guts, the pure willpower and a team effort in every sense of the word.

Up the Reds – Solskjaer 3-1 Guardiola – Manchester is Red!

Despite City’s almost exclusive dominance of the ball, De Gea had little to do as the men in front of him did a simply magnificent job. City were mainly restricted to efforts from long range and everything DDG had to do he did well. A day of contrasting fortunes for two of the league’s creme de la creme. Saved well from Phil Foden and Sergio Aguero sighters, but otherwise a more-comfortable-than-expected day at the office.

Imperious alongside Maguire. The pair seemed to win everything in the air and never gave a strangely subdued City a sniff. When the team was announced we thought he might be the weak link, and there were calls that Eric Bailly should have started ahead of him. Can’t fault the Iceman. Dealt with everything that came his way and read the game superbly

I hardly ever give players a ten, but Maguire was simply huge in the wave of a City siege. Cleared everything, won tackles, organised and rendered one of the best strikers in the world anonymous. He was an injury doubt before the match (or was it mind games), and how City will wish they – and not us – signed this man. Instead of weighing him down, the captaincy has seen his game lift a level. He seems telepathic at times, drawn to the ball like a magnet to head it out of danger. The perfect game from the United skipper. A rock. Immense. Magnificent. Heroic. My captain and man of the match without a doubt.

Got beaten a few times by the pace of Bernardo Silva but, stationed on the left of a back three, cleared everything that came his way. Such was City’s frustration, Guardiola switched Bernardo Silva with the below par Raheem Sterling to try and unsettle him, but Shaw would not budge. Followed up his mightily impressive form with another excellent performance. Top class. Epitomised the team’s resilience, courage and character.

Up against Raheem Sterling for the third time this season, AWB pushed the City star to the fringes. A bundle of power, strength and pace, Wan-Bissaka bombed forward at every opportunity and was simply immense as a right wing-back. An injury doubt before the game, AWB was passed fit and City simply couldn’t find a way past him. Tackling, breaking up attacks and battered his illustrious opponent into submission. Immense.

Very harshly booked in the first half for a dive that replays showed was a penalty. Admittedly aided by the absence of arguably the best in the business in Kevin de Bruyne, Fred was just as good as he was back at the Etihad in September. Won everything, linked the play, his passing was superb and he popped up omnipotently in attacking areas. One of the most in-form men on the continent in his position, he’s finally getting the credit he deserves.

I was worried about the selection of the Serbian for fear that he’s get overrun. How wrong I was, Matic was excellent again as a shield in front of United’s back three. It’s an amazing transformation for a player who didn’t look fit for purpose earlier this season but to his credit he’s done magnificently since coming into the team. He’ll never be United’s most skillful or important player but he does his job well and got the better of Ilkay Gundogan. Did his job. Rolls Royce performance.

Thrust into the limelight in his third Manchester derby, Williams more than played a part in another clean sheet. Made some key interceptions and tried to get forward. Didn’t shy away from his task and dovetailed nicely between defence and attack. Solid if not always swashbucking, Williams kept his head in the firepit and played a part in the first goal.

Quiet by his standards but provided a wonderful lobbed pass to Martial for the opener. Went close from a couple of set pieces and filled in as a striker as United held to their narrow advantage. A constant threat, Fernandes did his best defensively and at one point even started an attack from the edge of the 18 yard line. Another assist. The glue that held United together – why didn’t we sign him earlier? The brain, heart and lungs of this side – he demands excellence from those around him and the ultimate leader.

Ran himself into the ground. I can’t fault DJ’s effort and work rate but his decision making and final ball definitely needs improvement. There was an occasion where he went for goal and squandered the chance with Martial and Fernandes free in the box in space. It’s still bugging me but fortunately it didn’t cost us. Ripped City to shreds in the first game back in December, and has his moments this time around. Got subbed late on

Excellent again. Ederson should have saved the shot that led to his goal but Martial led the line superbly and had the hapless Nicolas Otamendi on toast all day. A constant threat, Martial never stopped running and was pivotal to United’s counter attacking plan. City thought he wasn’t switched on but he showed awareness and a predatory instinct. Got subbed late on to a standing ovation. Now has 16 for the season, one short of his best ever scoring season for the Reds. Took a knock when he slid into the post under a desperate lunge from Ederson.

Played his part as United put eleven men behind the ball to shore things up and see out the game. Won a few headers and made two good clearances, but he wasn’t on long enough. Unlucky not to start.

Like Bailly, was only on for the closing stages but played his part and scored the match winning goal in stoppage time. A 35 yard finish over Ederson sparked the most buoyant scenes OT has seen for years. He knows what this fixture means and added energy and guile to the midfield at a time when United needed it. Helped the Reds to wrestle back an element of control.

Came on late for his first taste of a Manchester derby but too late to make an impact. No rating.

Has now beaten the so called “best manager in the world” three times this season with another tactically perfect performance. Set United up to defend from the front, we were superbly organised and Ole deserves immense credit for fashioning a ten match unbeaten run. Long may it continue.