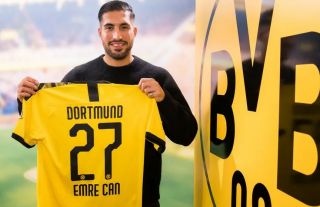 Although it often feels like Liverpool fans have something against Emre Can because he ran down his contract and left on a free, but he claims to have turned down a move to Manchester United out of respect for the Scousers.

The German was versatile enough and played in midfield as well as defence under Jurgen Klopp, but he was nothing special, and struggled to get a place at Juventus.

It didn’t work out for Can in Italy so he turned to his homeland and joined Borussia Dortmund, despite offers from various Premier League clubs.

READ MORE: McTominay punishes Ederson’s mistake with a fine finish from distance to seal the victory vs Man City

Can turned them all down, telling Sky Sports: “I had three Premier League deals alone, including one from Manchester United, but I didn’t think about that for a second because of my Liverpool past.”

United were probably looking for a midfielder to come in — along with Fernandes — for in or around the £20m region when they approached Can. Granted what he’s saying can be believed…

Can joined Dortmund for €25m (via BBC Sport) in a move that will see him play regularly again. Moreover, they’ve won all four games he’s started in since joining.

Liverpool fans wouldn’t be banging their fists if Can did join United. He wasn’t anything special there and they’ve upgraded with Fabinho in his place.

As for United, they should be aiming for a better defensive midfielder than Can. Something younger than Nemanja Matic.