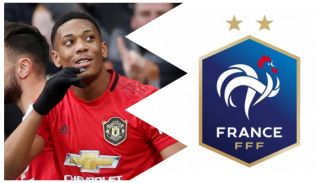 The high-flying striker is hoping to earn a spot in Didier Deschamps’ squad for this summer’s European Championship.

Anthony Martial took his tally to 17 goals for Manchester United this season after scoring an important opener in Sunday’s derby clash with Man City at Old Trafford. The arrival of Odion Ighalo has seen the former AS Monaco youngster raise his game and it’s having a huge impact on results.

Ole Gunnar Solskjaer put his trust in Martial to lead the line for United after selling Romelu Lukaku to Inter Milan. The Frenchman has scored in three of his last five outings, and has already formed a strong relationship with new signing Bruno Fernandes.

United are unbeaten in their last 10 games and are still in with a shot of FA Cup and Europa League success, as well as the fight for top four.

Martial is determined to get United back into the Champions League, but he is also thinking ahead of this summer’s European Championship.

When asked by RMC Sport if he hopes to return to the France squad this year, Martial said (translated by GOAL): “Yes, I’m thinking about it. I want to go to the Euros. We’ll see. I do my job, that’s all.

“I’m trying yo do my best to help United finish in the top four. I will try to score as many goals as possible to find the season well.”

Martial was a member of the France squad which reached the Euro 2016 final, but two years later he was left out of Deschamps’ World Cup winning squad.

Now, we are starting to see the best of Martial again but it will always be a challenge to make the French squad considering the options they have in attack.

Fingers crossed, of course. Martial has been out of the France team for some time.