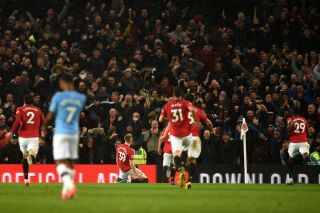 Manchester United played host to arch-rivals and noisy neighbours Manchester City in what was a hotly anticipated Premier League tie at Old Trafford.

Ole Gunnar Solskjaer’s side came into the tie unbeaten in 10-games in all competitions with their last being a dominant 3-0 victory over Wayne Rooney’s Derby County in the FA Cup.

Alongside Fernandes, Solskjaer opted to deploy a double-pivot system with Nemanja Matic and Fred sat at the base of United’s midfield.

Elsewhere, youngster Brandon Williams and defensive sensation Aaron Wan-Bissaka took up the wing-back positions in a system which saw United operate five at the back.

As the game got underway United came under moments of pressure at the hands of City’s offensive fire-power.

However, at the half-hour mark, United won a free-kick deep into City’s half, Fernandes made the kick his own as he played a neat ball over the City wall and straight into the path of the on-rushing Anthony Martial.

The French striker latched onto Fernandes’ ball and squeezed it past the usually solid City keeper Ederson. 1-0 United as the Stretford End erupted.

Chants of fifty million down the drain were still ringing out among the United faithful when box-to-box midfielder Fred found himself brought down inside of the City penalty area by centre-back Nicolas Otemendi moments before half-time.

Referee Mike Dean waved away what appeared to be a stonewall penalty and instead opted to book the United midfielder.

At the turn of the second half Pep Guardiola’s side came out in much the same fashion as they looked to level the Manchester Derby.

The introduction of striker Gabriel Jesus in place of Sergio Aguero added some more needed pace up front for the ‘Cityzens’ as they continued to pile the pressure on.

City’s building momentum prompted Solskjaer to mix it up tactically as he shifted the experienced Luke Shaw to left-back and introduced centre-back Eric Bailly in-place of youngster Williams.

Now operating a more rigid and disciplined system United knew they would have to remain firm in the final third of the game.

Solskjaer’s side found themselves heading into the final 10-minutes still 1-0 up as the United faithful were treated to Odion Ighalo and Scott McTominay in place of Fernandes and Martial respectively.

As the third official held up the board indicating seven minutes of injury time were to be played, United weren’t out of the woods just yet.

However, in a rare break-away, Ighalo held up the ball on the half-way line which he laid off brilliantly for Fred to run onto. As the Brazillian midfielder looked to play a through-ball, City keeper Ederson appeared to scupper United’s effort as he gratefully collected the ball and looked to initiate a quick counter-attack.

As Ederson threw the ball out he was obviously unaware that bright-spark McTominay was lurking just ahead of the half-way line.

The Scottish midfielder did not hesitate in his actions as he struck the ball first time in what was the last kick of the game. The ball travelled over 40-yards, over the top of Ederson and nestled it’s way into the City goal. 2-0 United. Dreamland for United. Old Trafford was bouncing.

Long after the game the United crowd and players celebrated the side’s win and clean sheet in a tie which saw United come into the game as major underdogs.

United will now be looking to continue in their domestic pursuit for top-four Champions League qualification. Currently enduring an impressive Europa League campaign manager Solskjaer will be all too aware that the absolute minimum expectation from United fans all around the globe is to be competing in Europe’s most illustrious competition; the Champions League.  The benefits that come with Champions League football is something the Norwegian will be hoping to deliver to Old Trafford next season.

After the game, speaking to BBC SPORT, manager Solskjaer addressed his side’s wonderful performance by reiterating how ‘privileged’ he feels to be the United manager. Solskjaer said: “It’s a privilege to be their manager.

“They give absolutely everything. They know they are all good players but they want to learn as well.

“We feel we are improving as a squad and a team. We feel the fans want us to do well and they see what we are doing, so it is getting better and better.

“But we are still fifth. We need points to catch Chelsea and Leicester, so need to keep plugging away.”

With the COVID-19 pandemic leaving much uncertainty around the sport and with no word on whether or not games will be postponed United are forced to look ahead to a midweek Europa League clash against Austrian outfit LASK.

Solskjaer will be hoping to extend his side’s impressive unbeaten run to 12-games in all competitions in what is beginning to look like a very promising squad dynamic forming. Exciting times may well be awaiting United.