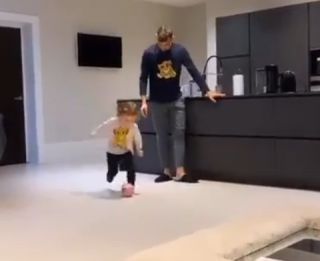 Bruno Fernandes is set to make his Manchester derby debut on Sunday.

With training done and dusted before the big match, preparations are in full swing, and Fernandes can be seen having some personal time with his daughter Matilde.

In the video shared on Instagram by Fernandes, he places the ball on the floor for his child. Matilde then does her best impression of her father before kicking the ball forward.

She then adorably copies her father’s iconic hands-over-ears celebration much to Bruno’s delight.

He will be hoping he can use it against City.

Pep Guardiola will be trying his best to close Fernandes out of the game.