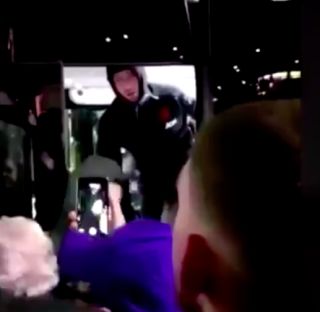 Jesse Lingard was subject to a torrent of vile abuse as he boarded the team bus after Thursday’s 3-0 victory over Derby County at Pride Park.

A couple of fans targeted the 27-year-old midfielder, who is already used to receiving a huge amount of unwarranted abuse online for his performances for Manchester United.

Lingard is not enjoying his best spell at the form at the club but this footage is sickening and no player deserves to be subject to such abhorrent abuse.

It is unclear which club these fans support but their torment of Lingard is aggressive and nasty.

There is absolutely no place for things like this in the game and fans prepared to hurl abuse like that should be banned from grounds.

Lingard was involved as Ole Gunnar Solskjaer’s side comfortably secured their passage into the FA Cup quarter-finals thanks to goals from Odion Ighalo and Luke Shaw.

The Reds will face Norwich at Carrow Road next in their bid to reach the semi-finals played at Wembley.

See the unacceptable behaviour from some idiotic fans below:

A few Manchester United fans were abusing Jesse Lingard after yesterday's game against Derby County. This video is quite awful to watch in all honesty.

What are your thoughts on it? 🤔🤮 pic.twitter.com/RSgxrVuV1e