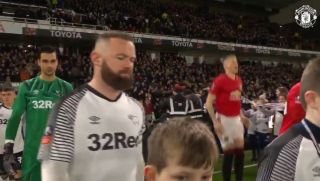 Manchester United booked their place in the FA Cup quarter-finals on Thursday night, after securing a commanding 3-0 victory over Derby County.

Luke Shaw and Odion Ighalo (2) scored the goals that put United into the next round, where a winnable trip to Norwich City awaits, as the Red Devils maintain the pursuit for a 13th FA Cup triumph.

You don’t see Shaw scoring goals very often, and it was his second ever goal for the club.

It was a bitterly cold night in Derbyshire but Ole Gunnar Solskjaer’s side are now unbeaten in nine fixtures across all competitions. He made six changes from the 1-1 draw at Goodison Park last weekend and Harry Maguire missed out after rolling his ankle in training.

Rooney, of course, was the main focus on the night. He played in a deep-lying midfield role and was loudly cheered by the travelling United support. The Derby player-coach forced Sergio Romero into more than one brilliant save during the game.

Check out the best bits below, footage courtesy of MUTV:

Check out all the best bits from last night’s 3-0 win at Pride Park 🎞️#MUFC pic.twitter.com/NjvlycVj2I