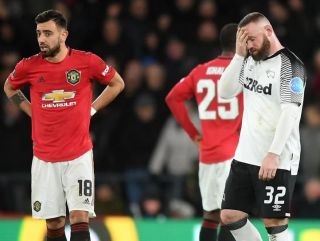 Manchester United secured their place in the FA quarter-finals after beating the Wayne Rooney led Derby County 3-0 last night. Here are some things we learned:

Odion Ighalo has found a home:

Much was said about the controversial last-minute January transfer for Odion Ighalo, but he is proving the naysayers wrong and with Marcus Rashford’s prolonged absence, Ighalo will continue to have more and more opportunities to score, something he was brought on to do in January.

Thursday evening saw his second full start and the second time he scored, twice for that matter. His first goal was a thing of beauty, a true striker’s goal that saw a space, got the pass, and found the back of the net.

His second goal was in the second half, capitalizing on a rebound after his first shot was blocked.

Sergio Romero doesn’t get the credit he deserves:

If there is one player on Manchester United’s roster that deserves more credit than they are receiving, it’s backup keeper Sergio Romero.

Yes, David De Gea is the number one goalkeeper but having the talent of Romero as a backup is a huge bonus. Through 13 appearances this season (mostly in Europa League, Carabao Cup, and FA Cup matches) Romero has 10 clean sheets.

Given the line-up in front of him at times, that is a staggering number of shutouts because he has been tested and proven he is more than capable of a number one role at United given De Gea’s mishaps at times this season.

The win on Thursday was the ninth match in all competitions that United didn’t lose, earning six wins and three draws. More importantly, they have only given up two goals in that span.

After a difficult early part of the season with injuries and line-up uncertainty, the United line-up is starting to take form and gel together as a group. The addition of Bruno Fernandes and Odion Ighalo has really solidified the line-up for manager Ole Gunnar Solskjaer.

Players like Fred and Luke Shaw coming into form in the midfield while key members were out injured are providing more stability in a position that desperately needs it.

The FA Cup draw has been kind:

United find themselves just three wins from a trophy, something that seemed very unlikely at the start of the season.

Norwich City will host United for the quarter-final match-up and United have fared pretty well against the Canaries, winning both matches this year in league play. A win at Carrow Road and United will be back at Wembley.

With Tottenham, and Liverpool out of the FA Cup and Chelsea playing Leicester, Sheffield United hosting Arsenal and Manchester City heading to Newcastle, the draw could have been much worse for United.