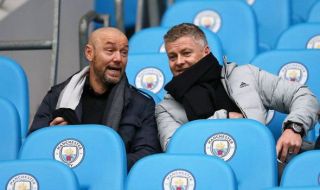 We caught up with Man City fan @PrestwichBlue for a quick chat ahead of the Manchester derby this weekend.

With FFP coming to bite City in the backside, Pep Guardiola’s side are banned from the Champions League for the next two seasons, even though they currently lead their round-of-16 tie 2-1 against Real Madrid.

We ask about City’s failed attempts to bypass FFP.

So, let’s start with your defence of the title this season. Pep Guardiola has a rather expensive squad — which just last season was laughably praised by some as the Premier League’s best. What’s happened?

If I knew the answer to that I’d be earning £15m a year as a top football manager! There are a few things. We lost Laporte & Sane early on. A few players – Sterling, Bernardo Silva primarily – haven’t hit the heights they achieved last season, we’re not moving the ball as quickly and effectively as we did, and our finishing has been way below par. Maybe the players are a bit burnt out or just got a bit complacent. We also lost Kompany, who I think was a huge influence. But we’re still 15 points better off than your expensive squad.

Why are City innocent of bypassing FFP? Instead of parroting lines from club about how bad UEFA are, it would be nice to hear some reasons why.

I’ve written tens of thousands of words on this, but I’ll try to keep it simple. First of all, as far as we can tell without knowing the exact details, this is just about the first assessment and specifically the 2012-13 financial year. We were trying to take advantage of a provision that could have seen us fail FFP but avoid sanctions. However, UEFA moved the goalposts so we couldn’t do that. As a result, we were punished and agreed a settlement with UEFA in 2014. For various reasons, that wasn’t necessarily a bad thing as it enabled us to clean the slate of our big losses that otherwise would have been carried forward.

UEFA have seemingly re-opened that 2014 settlement in this investigation and there’s an argument that they had no right to do so and/or exceeded their own time limit in doing so. No doubt that will be tested at CAS. The FA refused to get involved in the Liverpool hacking case as they said it was a long time ago and we’d agreed a settlement with Liverpool. The same should therefore apply to City & UEFA. We failed, were punished and were closely monitored for the next two years as part of that. We’ve been compliant with FFP since 2014.

This seems to be mainly about how some of our sponsorships were funded, with much of the money allegedly coming from Sheikh Mansour rather than Etihad. That’s arguable but even if it was true, UEFA’s consultants in 2014, PWC, claimed that Etihad was a ‘related party’. If so, then as long as the sponsorship is seen to be ‘fair value’ (which they said it was) it doesn’t matter where the money came from under FFP rules, including from the owner. But UEFA now seem to be arguing that Etihad isn’t a related party, therefore any owner investment isn’t allowed. It can only be one or the other and it seems they’ve gone for the position that suits them at any point in time rather than be consistent.

Will City keep their best players and Guardiola over this potential two-year ban, or has City’s honeymoon come to an abrupt end?

Not being funny here but you’ve kept your players and signed others when there’s no guarantee of winning titles or getting CL football. I also think it’ll persuade Pep to stay for longer as he wouldn’t want to be seen to be walking out if the ban is upheld. He’ll leave at some point and, as you know when Ferguson retired, losing a great manager is always a retrograde step.

Who would be your pick to replace Guardiola at any point?

Don’t laugh but I think Brendan Rodgers could do a decent job for us. He seems to have found some humility since leaving our mutual friends down the M62 and he’s learned how to get his teams to defend. Ideally though it would be someone like Mikel Arteta, who learnt his trade at Pep’s knee. I think it’s too early for him though at the moment. Maybe in 3 years.

Your thoughts on Ole Gunnar Solskjaer?

I met him once when we were next to each other filling our cars up. He’s a nice guy and it’s difficult (if not impossible) to dislike him. But it’s his managerial abilities that he’ll mainly be judged on and he looks out of his depth to be honest. He was a sop to the fans and wouldn’t have got the job on his record had he not been a United legend. But I’m not sure how anyone can succeed in the current set-up. Mourinho & van Gaal are two of the greatest managers of the modern era and even they both struggled so I’m not sure how someone who relegated Cardiff is going to succeed.

1. Liverpool (unfortunately), 2. City, 3. Leicester (despite a recent slump I think they’ll hang on) 4. It’s very open and I know it sounds daft, but I can see Sheffield United sneaking it.

And finally, predict the score.

Given that the away team seems to have the upper hand in the derby in recent games, I’m going 3-1 to City.