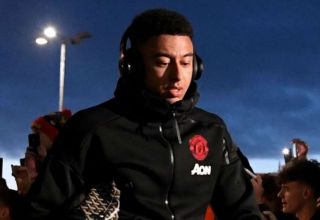 Manchester United have condemned the actions of those who launched foul-mouthed insults towards Jesse Lingard following a 3-0 FA Cup fifth-round win over Derby County.

The England international played the full 90 minutes at Pride Park on Thursday as the Red Devils qualified for the quarter-finals. The Rams with Wayne Rooney as their captain missing out.

As Lingard prepared to head home after the win, he was singled out for abuse by those who greeted the lads onto United’s team bus.

Lingard didn’t play poorly against Derby. If anything it looked like the midfielder was playing with more confidence, driving forward with the ball and trying to make things happen in the final third.

No, he’s not Bruno Fernandes. Nowhere near as good. But it has nothing to do with football when racism is brought into question.

We criticise United players from time to time but it’s always constructive. What good does slating a player do? Racism is never good.

Moreover, a lot of the abuse Lingard gets has seen him moved over a disappointing record of having registered no Premier League goals or assists in 2019.

Those struggles make him an easy target.

But it’s great to see Reds unite on social media to give Lingard some support.

I would say abuse in general. Doesn’t have to be racially to be out of line

Wow I’ve just seen that video of Lingard being abused by our fans last night and I’m appalled. You should be ashamed of yourselves. Honestly I wouldn’t blame Lingard if this made him want to leave. For real, I’d completely understand. Don’t even wait until summer, just leave mate

Is this really United fans? Accents sound a bit Midlands to me and it’s hardly only Reds who know his stats. Wouldn’t surprise me if it was Derby fans tbh. https://t.co/mCgMHsvcG6

That’s an interesting point by Jay. We don’t yet know if those caught abusing Lingard were United or Derby fans.

Lingard has been awful for a long time and deserves the criticism in relation to his footballing ability. It’s an entertainment business and he’s not been good enough. BUT filming yourself swear and abuse him….Disgusting. Very much suspect it’s Derby fans for the exposure

Wonder if whoever that was screaming at Lingard was there when he scored the winning goal in an FA Cup Final. Or that time he scored in a League Cup Final.

Agree with United’s assessment it “crosses a line”. Club are talking to Derby to investigate. #MUFC

Listening back to the video of Jesse being abused I’ve only just now heard the added racist remarks. It sounded like they were saying “Lingard” as apposed to the N word. Whichever it is, it’s a disgrace 🤬

Yeah it is shocking. Thankfully the vast majority of match-going supporters have a bit of sense and class about them. Rare to see such volatility off Twitter

Lingard is living every Manchester United fan’s dream, playing for the club he loves, after coming through the youth ranks. Don’t forget that.