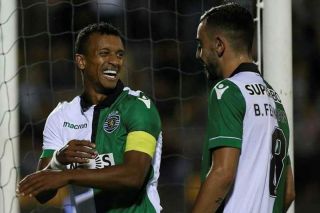 Nani says he urged his compatriot towards an Old Trafford move during their time together at Sporting Lisbon.

“That moment I was playing with him, I saw so much quality and so much potential in that player,” Nani told Goal.

“One day in a conservation with him I just motivated him to train a little bit harder because that was the only thing that he needed in that moment for him to compete at the high level in the Premier League or Spain or a different league.

“My advice, at that time, I told him that the best move for him was to go England because of his style fo game is the one they appreciate a lot and he will score beautiful goals as he liked to do with shooting from long-range and making the fans crazy.”

Former Manchester United winger Nani, currently playing for Orlando City in MLS, has revealed he directed Bruno Fernandes away from Man City before he completed his January move to the Premier League.

Fernandes was United’s big January signing and he has lifted spirits at Old Trafford — with the Red Devils on a 9-game unbeaten run.

The Portugal international has provided four goals and two assists in his first six matches with the club.

Nani say what he could bring to the table during his second stint at Sporting, where he played alongside the playmaker for half a season.

A player of Fernandes quality attracts interest and you can be sure that there were clubs interested before United finally swooped in. Nani says he’s thankful that his former club ended up with Fernandes.

“After a couple of months, he moved to Manchester United and I was so, so happy because that advice and his choice were matching.

“It was beautiful because the moment I saw him play there, being the best player, scoring goals. It’s nice when it works like that.”

A winning goal in the Manchester derby would do nicely!

On another note, it was brilliant advice because Fernandes has a better chance of playing Champions League next season than City. 😝