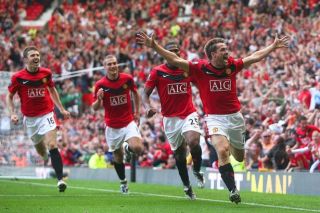 Former Manchester United striker Michael Owen, who scored a memorable derby goal himself, thinks this weekend’s game will end in a draw.

Owen joined the Red Devils on a free transfer in 2009 and his best acts in a United shirt was to score a late winner against Man City.

As a substitute, Owen scored in stoppage-time to give Sir Alex Ferguson’s side a famous 4-3 win.

Still, Owen’s close connections with Liverpool stopped him from being a true favourite amongst fans.

United won 2-1 at the Etihad in December and won again 1-0 there in the Carabao Cup semi-final in January, but it wasn’t enough as City had won the first leg 3-1 last Old Trafford. They claimed victory over Aston Villa in the final last weekend.

“Recent Carabao Cup winners Manchester City travel across Manchester for their derby clash with United in the match of the weekend,” he wrote in his column for the Bet Victor blog (as per The Mirror).

“They’ll be in a confident mood heading to Old Trafford but from the three matches between the sides this season, Manchester United have already won two.

“However, in what is sure to be a closely fought contest, I think the bragging rights will be shared with a goal and a point apiece.”

Cheers for that Owen. I don’t think we’d complain too much with a point at the weekend, granted we go on to beat Tottenham.

It’s time to get serious now as we hunt for that fourth spot.