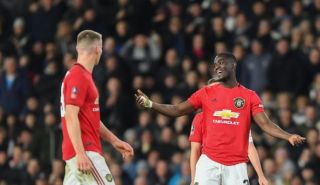 Manchester United welcome cross-town rivals Manchester City to Old Trafford for the 182nd Manchester derby and fourth of the season.

The Reds have won two of the previous three, but were narrowly knocked out by Pep Guardiola and co over the two legs of the Carabao Cup final. United put in our best performance of the season in December’s reverse fixture across the city and haven’t doubled our neighbours since the demolition derby in 2016 under Louis van Gaal. Remarkably, United have won only two of the last ten Old Trafford derbies, with City having prevailed on their last four visits to M16.

United have hit form at just the right time, on a nine-match unbeaten run having scored 22 goals and conceded only seven. Pep Guardiola’s City are out of contention for the title but won the aforementioned cup last weekend, they’re still in the FA Cup and hold a 2-1 advantage over Real Madrid in Europe despite the threat of a ban hanging over them. Without further ado, here is how we think Solskjaer will send out United as he reverts to a back three.

Made a clanger in last weekend’s draw at Everton, his seventh error leading directly to an opposition goal since the start of last season. Sergio Romero deputised with yet another clean sheet in the FA Cup win at Derby, but De Gea will come back in for the visit of City and opposite number Ederson, as two of the best keepers in the land go head to head. De Gea put on a clinic the last time these two met and can expect to be busy again against Sergio Aguero, Raheem Sterling, Riyad Mahrez and co.

Bailly played his way into contention with another strong showing against Derby. It’s a straight toss-up between the Ivorian and Victor Lindelof, and for me there’s only one winner. Bailly has the necessary pace to shut down City and has been like a new signing for us since coming back. I’d definitely play him here, and if he can stay fit, then I’d make him Harry Maguire’s regular first choice partner for the remainder of the campaign. I like him, Bailly is better than Lindelof and, although he had rashness in him, with Maguire alongside him he doesn’t get exposed.

Maguire missed the cup win over Derby with an ankle injury suffered in training, as per BBC Sport. Manager Solskjaer had planned to play the United captain in the cup win but instead Lindelof stepped in alongside Bailly. Although the pair kept a clean sheet, it will be a very different proposition against Guardiola’s men. Solskjaer said that his captain is “working hard to get fit but is touch and go,” as per RTÉ. We’re picking this selection based on the presumption that Maguire is indeed passed fit. He was immense at Goodison Park and any absence would be a blow. Lindelof is likely to fill in should Maguire not make the game.

Based on Solskjaer’s previous set up against tough, high ranked opponents, we think he’ll deploy a back three and Shaw will be a part of that. Shaw seemed to have lost his place to Brandon Williams but fair play to him for getting it back. Fully fit and brimming with confidence, Luke is a Shaw thing for any selection at the moment. When he was first selected as a third centre-back in a back three, it looked an accident waiting to happen. But Shaw has been nothing short of brilliant of late and fully deserves a place in Solskjaer’s selection. He can help United’s left wing-back to double up on the likes of Sterling, Bernardo Silva or Mahrez, too, so he gives us an extra man in that area of the pitch.

AWB missed the win over Derby after complaining of a sore back in the draw at Goodison, not that you’d know it on his all action performance. He probably wouldn’t have played against the Championship side anyway, and Solskjaer will hope one of his star men will be fit following his colossal showing on his derby debut back in December. Diogo Dalot could come in should AWB not pass a fitness test, but he’s defensively suspect and that’s not what you want against such a good side. Wan-Bissaka’s injury didn’t sound too serious, so we reckon he’ll be in the team for this one.

Slowly working his way back to full fitness, McTominay played 90 minutes at Pride Park on Thursday. Nemanja Matic was, in contrast, an unused sub against Derby so does that give us a little clue regarding Ole’s midfield make up against City. It would be harsh to drop Matic but I just worry he’d get run ragged and would be a passenger against the visitors diminutive and gifted technicians. Matic simpy doesn’t have the legs to avoid getting bogged down in there against City’s slickers. McTominay looks more capable against David Silva and Rodri, and his energy, ability in the press and distribution was vital in United’s win at the Etihad in December.  For that reason, I’d put him in ahead of Matic despite the fact the Serbian has been a surprise unsung hero for Solskjaer’s team of late.

Taken off to preserve his energy with United three up and cruising at Derby, the little Brazilian is an almost certain starter for United in this one. Up against the side that nearly signed him, Fred faces a busy afternoon as not only does he have to shut down the 2 Silva’s, Aguero and the surging runs of Rodri and Mahrez or Gabriel Jesus, but he’ll also need to set up attacks for his own team. We again need him to do exactly what we’ve seen in recent weeks. Fred was central to United’s upside down, against-the-odds victory at the Etihad and seems to be key to everything now. Both the player and Solskjaer deserve immense credit for his dramatic turnaround in fortunes.

The one bright spark for United on City’s last visit to OT, Williams has had to make do with a bench role for the last four games. I think he’s better suited to a wing back role rather than that of an out-and-out full-back, as it suits his attacking style more and he can leave much of the defensive side of things to the likes of Shaw. The competition Williams has provided has done wonders for Shaw and vice versa with both young men profiting for Ole’s faith in youth. Solskjaer has preferred a back three in this type of game and if he does so again we expect to see the two in tandem. Williams has a feisty streak, too, which I like, and isn’t afraid to get stuck in.

A first taste of this fixture for United’s impressive January signing. He may have had, by his standards, a quiet night against Derby but he was still involved in Shaw’s first goal and oozed class . Much of the spotlight in the build up will be focused on the battle of the string pulling conductors, with Kevin de Bruyne in direct opposition to the Portuguese. De Bruyne faces a race to be fit for the Old Trafford tie, but there’s no such issues for Fernandes. He faces his stiffest test so far in Red, but with seven assists and three goals in seven games so far, Fernandes is relishing his role as United’s newest talismanic figurehead. He will start in the number ten role, ahead of the midfield but tucked in behind United’s twin strikers.

Barring injury to his key attacker, there’s no reason to think Martial won’t play on Sunday. Rested against Derby to keep him fit and firing for this one, he sat all out but the last 17 minutes at Pride Park. Solskjaer simply couldn’t afford an injury to his key attacker and allowed him the night off. With 15 goals to his name, the mercurial, unpredictable Frenchman is on course to enjoy his best ever season in front of goal for the Reds having hit 17 in his debut season under LVG in 2015-16. Which Martial will show up? The incredible Sulk or the unplayable creme de la creme? With Fernandinho a weak spot in City’s backline and John Stones just as shaky, Martial will look exploit the one clear chink in Pep Guardiola’s formidable armoury.

This selection may surprise some people, but why not throw Ighalo in? It would be his first league start and a tough one too, but he’s done better than anyone thought he would. Three goals in five games – a better return than Arsenal’s 72m man Nicolas Pepe has had all season – Ighalo has also outscored Liverpool’s Roberto Firmino. If not for Jordan Pickford’s chest, things would have even better for him. He clearly loves playing for United, has a great new chant, has worked his socks off to get fit enough and is already cementing cult hero status. He links the play, can hold the ball up and gives us something different, another option. He scored two very good goals on his second start against Derby, and his wildcard selection might unsettle and hassle a far from convincing City defence. I think the Nigerian Prince deserves the chance to show what he can do in the harum scarum environment of a derby. Two strikers in a 3-4-1-2 setup – United’s blueprint to a hat-trick of derby day successes?

Solskjaer and United have generally got it right when it comes to the crunch. Every point is vital now as the congested battle for the top four – whilst low on quality – is certainly not lacking in drama. A third win over City this season might be too much to ask, but with the league title all but gone, will Pep’s focus be elsewhere? Maybe their guard will drop and throw in the fact that De Bruyne might be missing and suddenly a win doesn’t look beyond the realm of possibility. United save their best form for the biggest of games and, on our best unbeaten run of the season, I think we’ll get a result. We may fall just short of a victory, but this side is growing and we’re going for the draw.