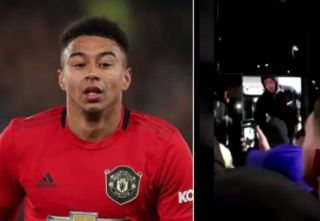 Jesse Lingard played in United’s 3-0 win over Derby in the FA Cup fifth-round at Pride Park.

According to Sky Sports, MUFC will speak to the Championship club about an incident which happened as Ole Gunnar Solskjaer’s squad got back onto the team bus after the match. Although it’s difficult to make out with so much shouting heard in the video we published, there doesn’t appear to be any racist terminology used.

Strangely, Sky’s brief report on the matter doesn’t mention racism — but that wasn’t the case for their social media post that linking to the article, as seen below.

Man Utd will seek to speak to Derby about the incident which happened as Jesse Lingard way onto the team bus at Pride Park.https://t.co/ON1tKheYal

Lingard obviously isn’t a fans’ favourite, but he doesn’t deserve this abuse.

Even if you don’t think he warrants the salary he’s on at United, this is an academy graduate who has grown up supporting this club, doing something we all dreamed of.

It’s down to the managers who keep selecting him that he was played through such dire form, but I should add that Lingard played well last night and looked like a player with a bit more confidence as he carried the ball forward.

What happened last night was deplorable.