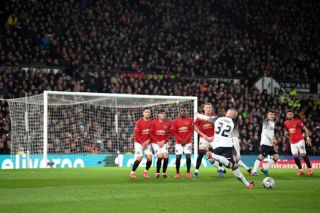 Manchester United qualified for the next round of the FA Cup with relative ease, overcoming Derby County 3-0.

Sergio Romero kept a clean sheet, having being made work for it, making five saves throughout the fifth-round encounter.

However, there is one save that stood out and it stopped a free-kick from former United captain Wayne Rooney, who got a warm reception from the away fans all night.

Rooney hit a wonderfully struck free-kick in added time that was headed for the top corner.

Then Romero dived to the rescue as he sprung across his line to palm it behind for a corner.

Former Arsenal and Chelsea midfielder wanted to see Rooney score against his former side, as he amusingly tweeted: “Oh come on… Just let it go in!”

Rooney said he would celebrate if he was fortunate enough to score against United, but that wouldn’t bother fans. Throughout his career Rooney has been a goal hunter. It’s his nature to score goals and that partly explains why he’s our all-time top goalscorer.

United booked their place in the quarter-finals last night and that’s what matters.