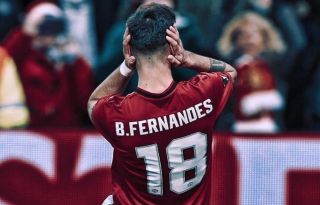 Bruno Fernandes has been shortlisted to receive the Premier League’s Player of the Month award for February.

A remarkable feat given it is his first month at Manchester United.

The 25-year-old hit the ground running in the Premier League, registering 2 assists, scoring a goal and being a huge influence in United’s unbeaten run of games.

With the Manchester derby this weekend, United are yet to lose since Fernandes made his debut. He will be hoping to silence Pep Guardiola’s men at Old Trafford on Sunday.

With any new signing, especially when it’s midway through the season, fans were urged to take caution with Fernandes as he’d need time to adapt to the Premier League. Something he’s took to like a fish in water.

It would be an understatement to say he’s made a difference since joining the club.

See the link below to vote for Fernandes to win February’s Premier League Player of the Month:

Fernandes has already won United’s player of the Month for February.

An award presentation in four parts 😅

A MASSIVE well done to @B_Fernandes8, who picked up his first #MUFC Player of the Month award today! 🥳 pic.twitter.com/ETqZnBu49Q