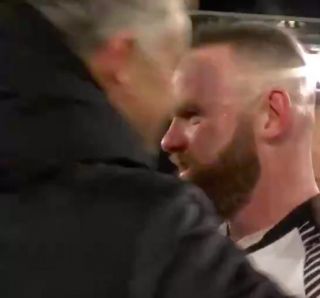 The former teammates embraced at the full-time whistle after a comfortable victory for Manchester United at Pride Park.

Rooney, operating in central midfield for Derby, exemplified the quality he has still has with several quality touches.

But despite coming close with two free-kick attempts, United’s all-time leading goalscorer could not prevent the Reds comfortably progressing into the next round.

Luke Shaw opened the scoring in the first-half before two Odion Ighalo strikes took the game away from the Championship opposition.

The victory was Solskjaer’s perfect preparation for Sunday’s pivotal Manchester derby where the Reds can put themselves in a favourable position in the run-in for the Champions League places.

See Solskjaer and Rooney below at full-time, courtesy of BT Sport:

Catching up with old friends 🤗

Great to see you, @WayneRooney – good luck for the rest of the season 👍#MUFC pic.twitter.com/4b1Jx1mBhZ

Wayne Rooney with a hug for Solskjaer and some words of encouragement for Brandon Williams at full-time in the #EmiratesFACup pic.twitter.com/qK79feCkUv