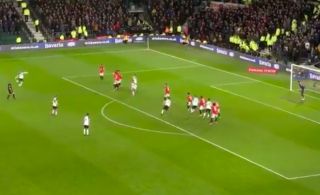 Sergio Romero denied Wayne Rooney getting on the scoresheet with a fantastic free-kick in the closing stages.

A Rooney goal would have only been a consolation, but a great moment nonetheless for the 34-year-old given what he did at Manchester United.

United’s all-time leading goalscorer came close on a couple of occasions this evening, but could not affect his side being defeated 3-0 at Pride Park.

Goals from Odion Ighalo (2) and Luke Shaw sealed a comfortable win for the Reds in what was perfect preparation for Sunday’s Manchester derby.

Rooney should be credited for exemplifying his stunning long-range passing range from midfield, and was given a fantastic reception by United fans all evening.

Reds were even singing “if Rooney scores, we’re on the the pitch” as he stepped up for the free-kick.

See the footage below, courtesy of BT Sport:

Wayne Rooney denied a late free-kick goal by a brilliant Romero save, and his eldest son Kai's reaction is just brilliant 😂#EmiratesFACup pic.twitter.com/DwINTyomou