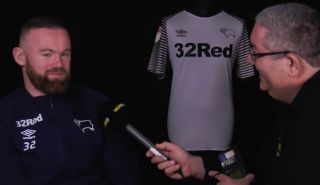 It’s not the first time Rooney has come up against his former club, where he spent thirteen years, but there is a big deal being made out of it because this is an important cup tie.

Speaking to talkSPORT in the video below, Rooney says: “Man Utd is a club I love but for this game I want them to lose.

“After the game I’ll go back to being a fan of them.”

“Man United is a club I love but for this game I want them to lose.” 🙏

“After the game I’ll go back to being a fan of them!” ❤️@WayneRooney won’t hold back if he scores for #DCFC against former club #MUFC in the FA Cup tonight! pic.twitter.com/SpkUGKyrZT

And we really don’t think United fans will care if he does. They will be disappointed to have conceded a goal but nobody should think bad of Rooney for celebrating a goal.

Goals are what he’s hunted throughout his career. Tonight he will be professional and try guide Derby into the FA Cup quarter-finals.

O’Hara believes he would be disrespecting his former side.

He told talkSPORT (via Manchester Evening News): “I think it’s fair enough him saying he wants Derby to win, but I don’t think he should celebrate if he scores.

“For Rooney, he’s a legend at Manchester United. He scored a lot of goals for them and given them some fantastic memories.

“So I think it’s just a respect thing there.”