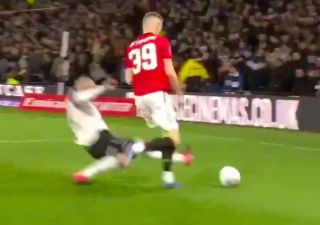 Wayne Rooney means business against his old club as Derby County host Manchester United in the FA Cup fifth round this evening.

United’s all-time record goalscorer has come close with a free-kick already at Pride Park, forcing a smart save from Sergio Romero.

And in the opening stages, Rooney gave United fans a throwback with his aggressive challenge on Scott McTominay.

As we saw so often in a United shirt, Rooney loves to track back and help out his side and his tackle with not even five minutes on the clock has shown his intent tonight.

See the video below, courtesy of BT Sport:

Wayne Rooney wasting absolutely no time getting stuck in against Man Utd 💪 pic.twitter.com/N991a3lN0x