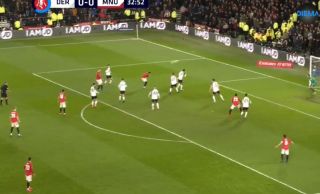 Luke Shaw has opened the scoring against Derby County in the FA Cup fifth round.

It counts as Shaw’s second goal for Manchester United and what a finish it was!

We are not sure if the ball takes a touch from Jesse Lingard after bouncing off the surface — but Shaw definitely deserves the goal.

Shaw has played really tonight but did make one mistake when he made a pointless tackle which saw him booked.

He’s been getting up and down the left flank a lot — and it helps that United are pushing far up the pitch to allow Shaw run into space where he wouldn’t usually have it.

Check out the goal below (footage courtesy of BT Sport).

If at first you don’t succeed, try, try, try… And try again!

Or will Lingard claim it? 👀#EmiratesFACup pic.twitter.com/MPAiRAOSdd

Would you give it to Shaw or Lingard?