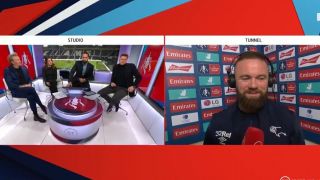 It was a memorable night in the FA Cup for Manchester United, even if it came at Wayne Rooney’s expense with Derby County losing 3-0.

Goals from Luke Shaw and Odion Ighalo booked United’s place in the quarter-finals — which will see the Red Devils travel to Norwich City, who beat Tottenham on penalties last night.

If tonight showed anything it’s that United don’t need to play in full flow to put away teams they should be beating.

It took Ole Gunnar Solskjaer’s side a while to get going but once they did Derby stood little chance.

Rooney was unable to find the back of the net but did force Sergio Romero into a brilliant save from a free-kick.

After the match he spoke to BT Sport, as seen below:

Wayne Rooney joined us on #FACupTonight to reflect on a memorable night against Man Utd. pic.twitter.com/rw8ZX032Et

The clip includes some beard envy from Rio Ferdinand and Rooney reacting to the love he received from the away fans on the night.

He credits the night as a great experience for Derby’s young players, who will learn a lot from battling through the trenches with Rooney.

Best of luck to Rooney for the rest of the season.