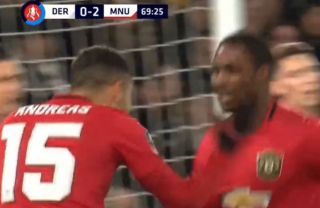 Odion Ighalo has scored his third goal for Manchester United, and his second of the night against Derby County.

The Nigerian striker found himself in the right place at the right time to make it 3-0 for United on the night.

He showed class movement inside the box and was ready to strike his rebound past the goalkeeper.

Watch it below, footage courtesy of beIN SPORTS:

He already looks an important signing for the Reds as we book our place in the next round of the FA Cup.