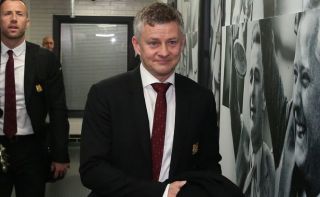 The team news is out.

Ole Gunnar Solskjaer has confirmed his staring line-up for the FA Cup fixture away to Derby County.

Harry Maguire is absent from the XI and bench, and Manchester Evening News reports that the England international is missing through an ankle injury.

The Red Devils head into their match at Pride Park knowing a win takes them into the quarter-finals of the FA Cup, where a trip to Norwich City awaits…

There is no room for complacency and United face their Championship opponents without club captain Maguire.

Speaking to MUTV before the game, Solskjaer said (via MEN): “I had a word with him before training yesterday that I am not going to rest him.

“But then he rolled his ankle in training so he had to stay at home. Hopefully he will be okay for the weekend, but I am not sure.”

To be honest, Solskjaer doesn’t give a lot away whenever he talks about injuries to United players. He likes to keep his cards close to his chest — like he did just last week with Anthony Martial, who missed the second leg against Club Brugge and started versus Everton.

But news of Maguire’s injury is a huge concern ahead of the derby fixture against Man City this Sunday.

Solskjaer admits places are up for grabs, adding: “You know the opposition but we have just got to think 90 minutes ahead and win this game. We need to go out there and perform.

“There is a couple of players getting a chance to claim a stake for the derby because I am not sure if Harry, Dan [James] or Aaron (Wan-Bissaka) are going to be available. So there are chances for a few.”

Hopefully it’s nothing serious and Solskjaer is trying to get more out of his two centre-backs tonight. Maguire would be a huge loss this weekend.