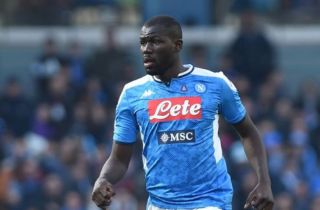 Napoli are reportedly ready to sell defender Kalidou Koulibaly in the summer transfer window amid speculation linking him with Manchester United.

Koulibaly was reported as one of United’s targets prior to the signing of Harry Maguire last summer, as per talkSPORT, so the club’s recruitment team should know a great deal about the Senegalese centre-back.

If not, now would be a good time to get some homework done…

It’s going to be interesting to see if United take action following Gazzetta dello Sport’s claim that Napoli club president Aurelio De Laurentiis will entertain offers for Koulibaly in the summer, as cited by the Manchester Evening News.

That could be Napoli’s transfer stance on their star player (welcoming the highest bidder) and there’s no denying he would be a top-class acquisition to partner Maguire in the heart of United’s defence.

Moreover, Calciomercato have recently suggested United are leading the chase to sign the Koulibaly as he’s made available for £90m, which seems a pretty generous price for one of the best defenders in the world.

Ole Gunnar Solskjaer has seen the defence improve this season with his chosen additions — Aaron Wan-Bissaka and Maguire — heavily influencing that. The club should now back him to add one more, with Koulibaly seemingly available it makes total sense.

And as revealed by the Evening Standard, Solskjaer thinks very highly of Koulibaly.

While it’s yet to be seen whether he will be a priority for the Red Devils, the prospect of signing a player of Koulibaly’s calibre will get Reds purring. We’ve seen the impact Bruno Fernandes has had on the squad over the past month!

The same ES report adds that the United manager believes Koulibaly is one of the three best centre-backs in world football at the moment. The other two include Maguire and Liverpool’s Virgil van Dijk — the two most expensive defenders of all-time.

Major conflicts between Napoli’s hierarchy and players this season have fuelled rumours linking a number of the club’s best players with summer moves.