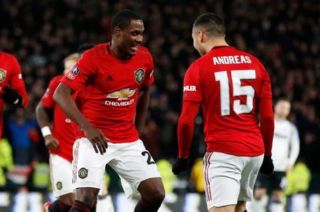 Manchester United have booked their place in the FA Cup quarter-finals after a 3-0 win over Derby County.

Luke Shaw was credited with the opener, although the ball deflected off Jesse Lingard’s back, and Odion Ighalo bagged a brace.

Norwich City now await United in the next round of the FA Cup.

Sergio Romero – Brilliant save to deny Rooney in the first-half. Another clean sheet in the cup. 7

Diogo Dalot – Patrice Evra’s right-foot outs Dalot’s left to shame. And that’s saying something. Doesn’t look like the long-term option at RB José Mourinho said he was getting when he signed him. 5

Eric Bailly – Looked good again. I’d start him in the derby against Man City this weekend. 8

Luke Shaw – We’ll give him the first goal, even if it went in off Lingard’s back. Ole was seen demanding his to midfielders get further forward throughout the match and this allowed Shaw get the ball and run into spaces he doesn’t usually. The manager has often said Shaw needs to get forward more. Looked assured tonight with a goal and assist. 8 MOTM

Scott McTominay – Looked rusty. New boy Fernandes gave him a telling off early in the game after losing possession. Derby’s Sibley gave him a battle on the night. 5

Fred – Hacked down by Rooney at one point, the Brazilian kept United’s midfield flowing with his work in defence and attack. 7

Bruno Fernandes – Wasn’t his best display yet but still made things tick and played some beautiful passing exchanges with Mata. Top player. 7

Juan Mata – Quiet other than the few flashes of brilliance with Fernandes. 5

Jesse Lingard – His back played a part in the first goal. Got forward with the ball and looked more confident. 6

Odion Ighalo – Scored a brace and is off to a flying start as a United player. 8

No ratings for subs.