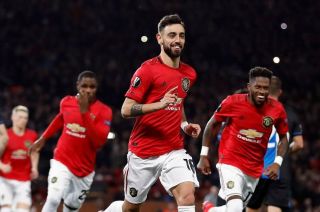 Ole Gunnar Solskjaer has named his starting eleven to face the Rams in the FA Cup fifth round, with six changes from Sunday’s 1-1 draw versus Everton. The winner tonight travels to Norwich City in the quarter-finals.

It comes as no surprise that Romero starts and that has nothing to do with David de Gea’s mistake at the weekend. The Argentine has been our cup goalkeeper throughout the season, as is usually the case with second choice keepers.

We’re happy to see Eric Bailly back in the line-up. Another strong performance and he could get a long run in the team alongside Harry Maguire, who doesn’t feature in the team tonight, with the Ivorian partnered by Victor Lindelof.

Bruno Fernandes gets his first taste of FA Cup football and hopefully he will unlock Derby to put United through. It’s a big night for Jesse Lingard and Juan Mata… Let’s see what they can do on the same pitch as Fernandes.

And a goal or two from Odion Ighalo would be the icing on the cake.

Wayne Rooney starts for Derby against his former side and has said he would celebrate if fortunate enough to score against United. Wazza has been a goal hunter all his career, so don’t expect that to change for 90-mins, extra-time or penalties. The game outcome will be decided tonight either way.

We wish Rooney well with Derby but hopefully they go no further in the FA Cup.

Of course, Rooney isn’t the only former United player in the Derby ranks at the moment. Tom Lawrence made one start for the Reds, in the final home game of the 2013/14 season. He was sold to Leicester City in the summer of 2014 but still has strong links with Ryan Giggs, with the United legend great regularly picking him for his Wales squads now.