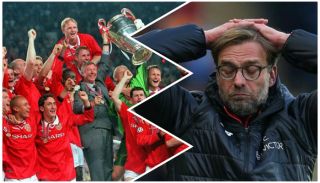 Former Manchester United defender Wes Brown is correct in saying there is no comparison between Liverpool and United’s 1999 treble winning side.

Liverpool look set to win the Premier League but were knocked out of the FA Cup during the week and trail Atletico Madrid in the Champions League. It could be a rough period for a side some tipped for more than one honour this season.

“This Liverpool team is a very good team,” he told talkSPORT. “They’ve totally dominated in the league this season but until someone actually does the treble there are no comparisons to make.

“It’s not even a question to me at all! You can only compare when a team has actually done it. Winning the treble is such a difficult thing to do.”

It must aggravate lads like Brown, who played in ’99, when they see people compare them to a bunch of pretenders.

Arsenal’s ‘Invincibles’ lost 6 times that season they never stop talking about. United lost only 4 times in 1998/98, got through an incredibly strong Champions League group, in semi-finals beat a team who had been in three finals on the bounce, and in the FA Cup beat every finalist from the previous three years.

Now, it would be great if Atletico could do us a favour and knock them out of Europe next!

Brown reveals that he still plays five-a-side with Wayne Rooney, in the same talkSPORT exclusive interview.

“There’s probably four or five of us and we’re still friends to this day. I’m in touch with John O’Shea, Wayne Rooney and Darren Fletcher. We still play five-a-side now.

“You make close friends at the club and we’ve got a WhatsApp group with about 16 of us. It’s a good laugh!

“I was with John at Sunderland too so I basically had my whole career with him.”

United take on Rooney’s Derby County side in the FA Cup this evening. Check out our match preview, predicted MUFC line-up and Rooney’s pre-match thoughts.