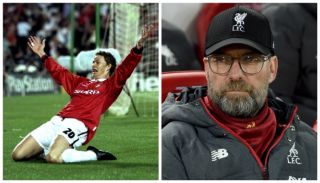 Beating Chelsea away in the FA Cup to stay in contention for the treble just isn’t for everyone.

Liverpool, the team that not long ago was compared to Manchester United’s treble winners in 1999, crashed out of the FA Cup last night after suffered a 2-0 defeat at Stamford Bridge.

They are also at risk of being knocked out of the Champions League after losing 1-0 in their first leg clash against Atletico Madrid.

READ MORE: Solskjaer: Everyone appreciates what Wayne Rooney did for Manchester United

Sadly, they’ll win their first league title in 30-years but it’s nice to see them crumble before the giddiness reaches a new level. And it’s unbearable as it is…

Ole Gunnar Solskjaer scored the iconic goal that secured United the treble in 1999. He was asked about Liverpool’s long-lost dream this evening, as quoted by the Manchester Evening News:

“Well, for me it was a fantastic final to play in ‘99 and it’s always been the last game of the season, a spectacle, you can never ever underrate the FA Cup how much it means and for us it was a big step towards. The semi-final against Arsenal, that was maybe the turning point. The Treble was a fantastic achievement. We hope we’re gonna do it again but it’s a difficult task and more or less impossible, there are so many good teams around, it has changed domestically, it was either us or Arsenal in ‘99 and now there’s more of us.”

Anyhow, back in their boxes — and hopefully it’s their passport being put back in the drawer next.

It would be hilarious if United ended the season with more trophies than Liverpool this season, especially given the press their team has received over the last two years, and how we’ve been beyond inconsistent.

United’s aim for the season is to get back into the Champions League either by winning the Europa League or finishing in the top four.