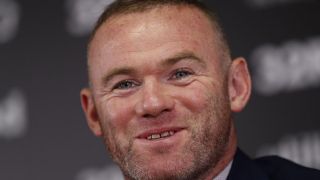 Manchester United travel to Derby County in the FA Cup fifth round on Thursday night, with all pre-match talk focusing on Wayne Rooney.

The Rams’ skipper spent thirteen years at Old Trafford, joining as a teenager from Everton, and won countless trophies before leaving as the club’s all-time record goalscorer.

Rooney has faced United since leading the club already — after re-joining Everton, in 2017.

He joined Derby as player-coach in January after a spell at DC United in MLS.

It goes without saying that he will get a warm reception from the away fans tomorrow night. Rooney brought us some great memories down the years.

Ahead of the match, Rooney has been speaking highly about United (via The Mirror): “For me, it is a big game playing against my former team. I captained Everton against them and it is always strange when you play against a former team, especially when you have been there so long. I love the club and it is a team I want to do well and win.”

But be under no impression that Rooney is so devoted to United that he won’t try score a few goals when the team’s face off. His winning mentality will then come into play.

“I have visited Derby as a Manchester United player in the FA Cup before and know what it means to the fans and staff here,” he added. “It is for us as players to go on the pitch to try and get a good result.”

Rooney has one FA Cup winners’ medal from his time in Manchester.

Meanwhile, Ole Gunnar Solskjaer has warned that his former team-mate will want to prove there is “life in an old dog”.

Solskjaer was asked about the danger Rooney poses in his pre-match press conference. He said (via The Guardian): “He’s a threat in and around the box, at set-plays and in this game Wayne will show what he can do — he will want to prove there is still fight in the old dog.

“We’ve got to be on our toes and don’t give him any space in midfield [too]. He’s got that [Paul] Scholesy-like passing range.

“He’s been a fantastic player for Manchester United and he played here for so long, he’s the club’s top scorer, won so many trophies. I don’t think the fans underrated him — everyone appreciates what he did for us. He’s still welcome, still comes to Old Trafford and will get a good reception from our away fans.”

Solskjaer also joked about what would happen if Rooney scores against United.

“Wazza gave absolutely everything for this club but any goal he scores against us will be chalked off his goals tally.”