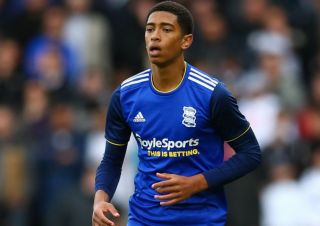 The Reds could miss out on signing Jude Bellingham.

Bellingham was linked with a move to Manchester United in January, as per talkSPORT, but now it seems the Birmingham City youngster has agreed personal terms with Bundesliga outfit Borussia Dortmund.

That’s according to a report by Sport Bild, who claim Dortmund will have to pay in the region of €35m to sign Bellingham.

That would make Bellingham a new club record transfer — after Dortmund paid just over €30m for Mats Hummels in 2015.

And you’d have to say this kid is a typical Dortmund signing. They don’t buy superstars but claim to make them.

Erling Halend joined BVB in the summer despite interest from United, as per The Express, and they’ve got Jadon Sancho for the time being…

This season, however, Bellingham has been getting plenty of game time. He must ensure that will be the case again at his next club.

The 16-year-old has already played 31 games in the Championship — scoring four goals and registering three assists.

BVB are clearly dipping into the English market for young talent and hoping that they come across the next Sancho, but Bellingham prefers to play centrally, almost like Tottenham’s Dele Alli.

Borussia Dortmund have agreed terms with Birmingham City teenager Jude Bellingham, according to Sport Bild. He had been linked with Man Utd. #BVB #BCFC #MUFC