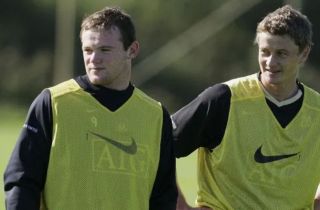 Wayne Rooney is a Manchester United legend. It doesn’t need arguing, although there are a few who try belittle him for handing in two transfer requests during his time at Old Trafford.

Was he right to question the club’s ambition after Gabriel Oberatan, Michael Owen and Antonio Valencia came in the summer Cristiano Ronaldo left? Yeah, without question.

Rooney stayed but kept his infamous agent Paul Stretford. Now he is preparing to take on his former club in the FA Cup with Derby County.

Ole Gunnar Solskjaer, who was Rooney’s team-mate at Old Trafford, will lead his United side out against the Rams but is sure the away fans will show respect to their all-time top goalscorer.

He was asked if Rooney was underappreciated at United, and replied (via Manchester Evening News): “He’s been a fantastic player for Man United and he played here for so long, he’s the club’s top scorer, he’s won so many trophies. For me, I don’t think the fans underrated him, everyone appreciates what he did for us, he’s still welcome, still comes to Old Trafford and will get a good reception from away fans.”

Then when asked if other fans underappreciated Rooney, he said: “I don’t think any Manchester United player thinks what about them and that’s the key for Wazza, he gave absolutely everything for this club. But any goal he scores against us will be chalked off his goals tally. He’s a threat in and around the box, set plays and this game Wayne will show what he can do and he wants to prove there is still fight in the old dog, we’ve gotta be on our toes, we don’t give him any space or in midfield, he’s got that Scholesy like passing range.”

Speaking of goals, Derby coach and former Premier League goalkeeper Shay Given thinks Rooney will celebrate if he scores against United.

We, of course, wouldn’t have an issue with that. I find it very weird when a player mutes a celebration after scoring a goal. Goals are the aim of the game.

Check out our match preview and predicted MUFC line-up versus Derby County.