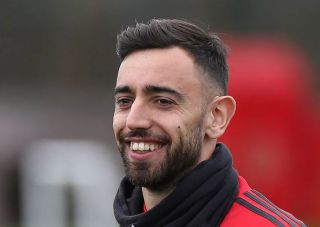 Bruno Fernandes has already had a massive impact at Manchester United.

The Portugal international genuinely looks like a gem who could be compared to some of the best midfielders in the world. At 25, his best days will be at Old Trafford.

Then we are in for a real treat.

He has completely squashed any doubts about his ability to adapt to the Premier League. No-one can complain with a three goals and two assists return in six games for the club.

United are also unbeaten with Fernandes in their side and he’s earned praise from pundits.

The midfielder has caught Ryan Giggs’ attention. As quoted by Sky Sports, the MUFC legend said: “He’s a fantastic player. He’s lifted the place, he has lifted everyone around him and it’s still early days.”

It’s been hard to see talented players come in the past and fail to succeed because of switching managers, bad recruitment or different playing styles enforced to cushion an unbalanced squad lacking quality.

He added: “I still think he can get even better. He’s hit the ground running which is what you want — especially after signing in the January transfer window, it doesn’t always happen. But he’s fantastic and I’m pleased to see him doing so well.”

Words of encouragement from Giggsy, who is bound to be Team Ole and lapping up our better form. It would be fantastic if Fernandes can make a difference and lead the Red Devils to Europa League success and a top four spot.