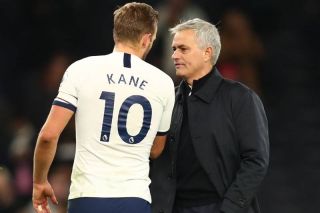 Harry Kane is reportedly interested in a move to Manchester United this summer.

The Tottenham striker is said to be reluctant to wait for the rebuild required to take his side back to challenging for major honours, which they did briefly under Mauricio Pochettino. Now under former United boss José Mourinho they’ve continued to stutter.

Goal claims sources close to the England international have made it known that the forward would be keen on a potential move to United.

United need a goalscorer and although injury prone, Kane is one of the best out there, and a bid surely warrants consideration if the player’s representatives are dropping hints such as thing one (granted you believe it).

Spurs should have taken caution with the reasons to believe Mourinho is a spent force in the modern game. We didn’t — and the signs began during his time at Real Madrid — and Ed Woodward didn’t bother his backside to back him in the transfer market.

There has been a significant drop off from this Spurs side this season, of course, going from reaching the Champions League final to not yet looking like the team that will clinch fourth place.

Is Mourinho the right man for Spurs’ rebuild? Kane is right to ask that question and probably has some loyalty to Pochettino.

That’s a man who could rebuild a side, and we’re wondering if this could mean Kane has sights on linking up with his former coach at Old Trafford? The Pochettino to United reports resurface from time to time…

Kane’s contract runs out in 2024, so Spurs chairman Daniel Levy would be demanding a hefty fee.

The striker is currently out with a hamstring injury.