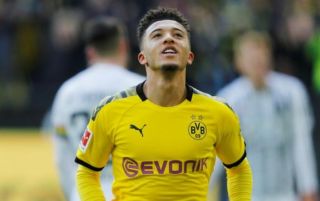 A report claiming Manchester United could sign Jadon Sancho and Jack Grealish this summer has appeared on Bleacher Report’s website, written by Dean Jones (@DeanJonesBR) who has had his share of accurate transfer stories in the past.

Jones has claimed if United’s plan comes together in the summer we will have a pretty special line-up in our first match of the next Premier League season — following the additions of Grealish and Sancho, playing with Anthony Martial, Marcus Rashford and January arrival Bruno Fernandes.

Sources tell Bleacher Report that the interest in these players should be taken seriously as “United mean business”.

That’s great — but haven’t United always let on that they mean business. Remember, ‘We can do things in the transfer market that other clubs can only dream of’?

We’re not going to sit and be fooled. Like every sensible fan we will believe it when the player in question is holding the shirt after putting pen to paper. A lot of transfer speculation is time wasted.

Still, the prospect of having both Sancho and Grealish at United next season is an exciting one.

B/R were informed by a source: “Everyone wants to play for us.”

But Jones goes on to claim B/R has been told by multiple sources that Sancho “loves the idea of joining.” However, Champions League football is a factor.

As for Grealish, it seems like he has leapfrogged Leicester City’s James Maddison. His form this season would suggest why, with seven goals and six assists in the Premier League despite Villa falling into a relegation battle.

B/R add that City are interested in Grealish, too, as a strong option to boost their home-grown quota.